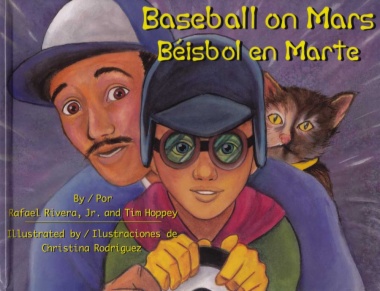 A heartwarming bilingual picture book about a boy and his father, who bond over a game of catch on the Red Planet.

Roberto's dad speaks in Spanish when he gets upset, and boy, is he unhappy today! His lucky chairthe one he sits in to watch his beloved New York Yankees playis missing. And he needs it for the afternoon game against the Red Sox!
Roberto is excited, too. Hes about to take off to Mars on his home-made rocket ship, and his dads lucky chair makes a perfect pilots seat. When his father finds that the missing chair has become part of the rocket ship in the backyard, he grudgingly tells Roberto he can use itfor now. But it needs to be returned before game time.
Robertos dad is skeptical about the rocket ship. You might have a problem getting off the ground, he says. Youre forgetting one little thingyou dont have an engine! Soon, he finds himself invited along as co-pilot. And during the exciting flight to Mars, Roberto helps his father rediscover his imagination as they experience an amazing blastoff, wayward asteroids, and even weightlessness.