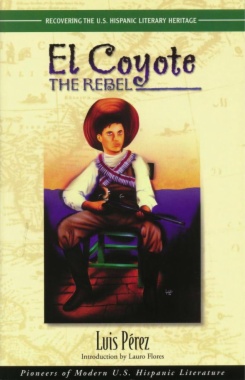 A soldier at the age of eleven. An honorably discharged veteran at the age of thirteen. A miner, a cotton-picker, a shepherd, and a graduate of Hollywood High. Luis Pérez lived an incredible life and then shaped his story into a vividly realized autobiographical novel.

El Coyote, the Rebel, originally published in 1947, tells how the toddler Luis, son of an Aztec mother and a French diplomat father, ended up in the care of an uncle who soon drank away most of the boy’s inheritance. Having run away from cruel treatment, Luis by chance came to fight with the rebel armies in the 1910 Mexican Revolution, received the nickname of “El Coyote” for his cunning, and was wounded in combat. Upon being given a discharge and a twenty-dollar bill, he walked across the border to become an American. His story concludes—after an episode of amorous misadventures in a missionary school—with the young hero preparing to marry his true love and solemnly taking the oath of U. S. citizenship, at “the beginning of a new tomorrow.”