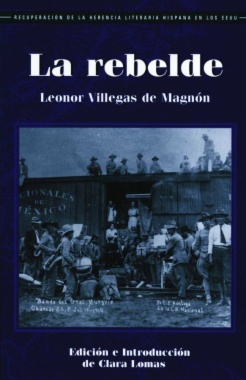 La Rebelde marks the first printing of the original Spanish-language version of the memoir written by a revolutionary woman, Leonor Villegas de Magnón (1876-1955). Villegas de Magnón was a fiery critic of dictator Porfirio Díaz and a conspirator and participant in the Mexican Revolution. She rebelled against the ideals of her aristocratic class and against the traditional role of women in her society. In 1910 Villegas de Magnón moved from Mexico to Laredo, Texas, where she continued supporting the revolution as a member of the Junta Revolucionaria (Revolutionary Council) and as an incisive editorialist in Laredo newspapers. In 1913, she founded La Cruz Blanca (The White Cross), a corps of nurses for the revolutionary forces active from the border region to Mexico City.
Many women from both sides of the border risked their lives and left their families to support the revolution. Years later, however, when their participation remained unacknowledged and was running the risk of being forgotten, Villegas de Magnón decided to write her personal account of this history. With enthralling text and 22 pages of photos, La Rebelde examines the period from 1876 through 1920, documenting the heroic actions of the women. Written in the third person with a romantic fervor, the narrative weaves Villegas de Magnón's autobiography with the story of La Cruz Blanca.
Villegas de Magnón's written contributions have remained virtually unrecognized-peripheral to both Mexico and the United States. Not only does her work affirm the vitality, strength and involvement of women in sociopolitical concerns, but it also stands as one of the very few written documents that consciously challenges stereotyped misconceptions of Mexican Americans held by both Mexicans and Anglo Americans.