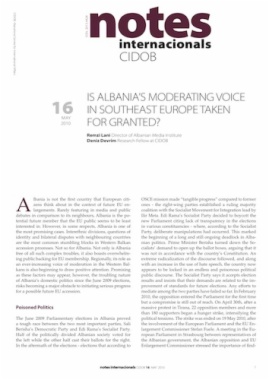 Is Albania's moderating voice in Southeast Europe taken for granted?

Albania is not the first country that European citizens think about in the context of future EU enlargements. Rarely featuring in media and public debates in comparison to its neighbours, Albania is the potential future member that the EU public seems to be least interested in. However, in some respects, Albania is one of the most promising cases. Interethnic divisions, questions of identity and bilateral disputes with neighbouring countries are the most common stumbling blocks in Western Balkan accession processes. Not so for Albania. Not only is Albania free of all such complex troubles, it also boasts overwhelming public backing for EU membership. Regionally, its role as an ever-increasing voice of moderation in the Western Balkans is also beginning to draw positive attention. Promising as these factors may appear, however, the troubling nature of Albania’s domestic politics since the June 2009 elections, risks becoming a major obstacle to initiating serious progress for a possible future EU accession.