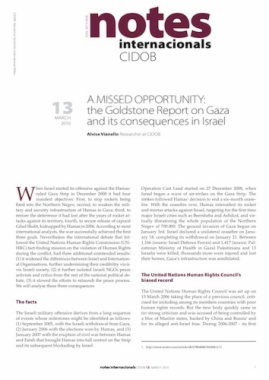 A missed opportunity: the Goldstone Report on Gaza and its consequences in Israel

When Israel started its offensive against the Hamas-ruled Gaza Strip in December 2008 it had four manifest objectives: First, to stop rockets being fired into the Northern Negev; second, to weaken the mili-tary and security infrastructure of Hamas in Gaza; third, to restore the deterrence it had lost after the years of rocket at-tacks against its territory, fourth, to secure release of caporal Gilad Shalit, kidnapped by Hamas in 2006. According to most international analysts, the war successfully achieved the first three goals. Nevertheless the international debate that fol-lowed the United Nations Human Rights Commission (UN-HRC) fact-finding mission on the violation of Human Rights during the conflict, had three additional unintended results: (1) it widened the differences between Israel and Internation-al Organisations, further undermining their credibility vis-à-vis Israeli society, (2) it further isolated Israeli NGOs peace activists and critics from the rest of the national political de-bate, (3) it slowed the efforts to relaunch the peace process. We will analyse these three consequences.