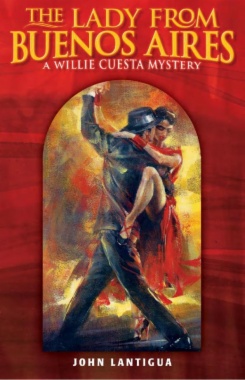 The lady from Buenos Aires : a Willie Cuesta mystery

Willie Cuesta wears tropical shirts, cool linen slacks, and Mexican sandals to ward off the Florida heat. Formerly a Miami Police Department detective, he now works as chief of security at his brother’s salsa club while he waits for new clients at his detective agency in Little Havana.

After meeting Fiona Bonaventura, Willie quickly realizes that her predicament isn’t a straight forward missing-persons case. The elegant Argentinean is convinced that she has found her dead sister’s daughter. Her sister Sonia disappeared during Argentina’s “dirty war” more than twenty years ago, but her pregnant body was never found. Fiona has never stopped searching for her sister’s child, and several times has been steps away from finding the girl she is convinced is her niece. This time she has tracked the girl to Miami, and Fiona is determined not to lose her again.
As Willie delves into the case, a host of shady characters surface with ties to the Argentinean military dictatorship responsible for the death and disappearance of thousands of citizens: Sarah Ingram, who teaches tango in a dance studio in a quiet, suburban neighborhood; her polo-playing husband who makes it clear he won’t tolerate questions about his intelligence work in Argentina years ago; a terrified man who survived torture and imprisonment during the “dirty war” and may be able to identify some of his torturers if he can set his fear aside; and even an Argentine diplomat.
When people associated with the case start turning up dead and Willie finds himself held captive in the back of an SUV, he knows for sure that death squads from another time and place have arrived in Miami. As the vehicle careens through the pre-dawn streets of Miami, Willie Cuesta must hang on desperately as his latest case spirals out of control.