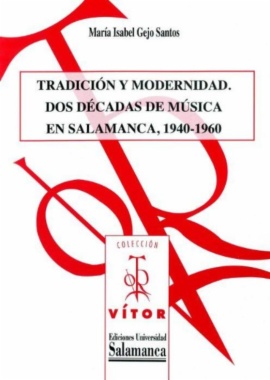 The present research shows musical history and musical institutions of Salamanca (German Cultural Institute, Italian Institute of Culture in Salamanca, Provincial, Regional Music Academy, Symphonic orchestra and Philharmonic Society of Salamanca) from the end of the Civil War, between 1940 and 1960. On the other hand, this study rebuilds the role played by the elites in the revitalization of the Salamanca musical institutions. This analysis determines the nature and composition of the ruling minority which led, for two decades, and, in its turn, was recipient of the same institutions. Moreover, the work discovers the use of this activity as a cultural instrument of Salamanca elite, that is, as one of the mechanisms that can be used to distinguish the whole of society and to strengthen its leading role. Finally, it analyses the evolution of aesthetic-musical repertoires and auditions that this minority received for over twenty years, which places it at par with other Spanish industrial and commercial elites. This Thesis is an interdisciplinary work in which different research lines have been applied such as oral history, prosopography and voluntary associations, although the main method used was oral history.