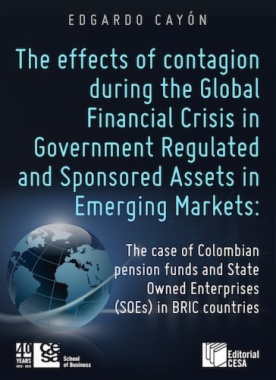 The effects of financial contagion during the global financial crisis in government regulated and sponsored assets in emerging markets : The case of Colombian pension funds and State Owned Enterprises (SOEs) in BRIC countries

The effects of financial contagion during the Global Financial Crisis (GFC) have been extensively studied in the finance literarure. One of the key issues is the devastating effect of the crisis on wealth and asset prices. However, one key difference between this crisis and other crises in the past was the resilience (immunity) or the short term effect of the crisis on emerging markets. Dooley and Hutchison (2009) were the first ones to find evidence in support of the decoupling hypothesis of emerging markets during the early phases of the crisis. Since then the hypothesis have been tested by other researchers (for recent surveys see: Beirne and Gieck, 2014; Koksal and Orhan, 2013).