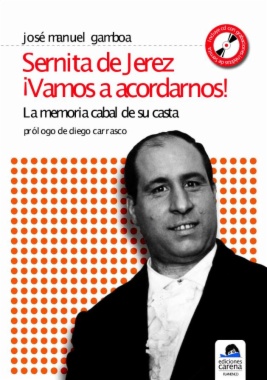 José Manuel Gamboa presents us a fabulous biography on Sernita de Jerez, one of the parents of the contemporary Andalusian flamenco singing.

There is the one who is born where he has to, but out of epoch. Sernita de Jerez came to the world in territory chipén, when bad times were running for poetry. In his adolescence he saw that things were very hard, that the stew was not stewing. Among those of his same country generation he had to place himself in the emigrant forefront, leaving full of contentment with his Andalusian shipment of entity; bringing in his thought a whole world of happiness, thinking of remedying the situation of home, which was all his illusion. And happily Sernita went away to the world singing. With Susana and José, with Antonio the Dancer… And in Madrid he settled itself, where he would sign his better sing. Gypsy of caste and father of a race of artists, as teacher he followed the hidden path, the one that separates us from prejudices and loves Andalucía entirely, playing the pioneer's role. In many senses he is one of the parents of contemporary flamenco, though time did not give him truce to enjoy it, as José Manuel Gamboa expresses masterfully, in this intimate, original and magical work, in which the feelings, the wittiness and the rigor are mixed to do of his reading a refined pleasure.