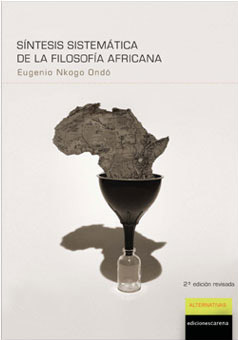 Síntesis sistemática de la filosofía africana contributes surprising information on the origin of western civilization. Philosophers and not even literary Greeks arose from nothing, not even the Egyptian civilization was born in itself, as a miracle. The conductive thread, the nutritious fountain of both cultural "miracles" "Egyptian and Greek" is in the African culture.
And it could not be otherwise since our species, the homo sapiens, arose in Africa only 200 milleniums ago. There the first essential achievements of the human condition took place: the oral and written language and the emergency of the systematized thought, of the ethical and artistic dimension of mankind. With great depth Eugenio Nkogo demonstrates that the humanist civilization came from Africa to West across Egypt and Rome. After suffering slavery and colonialism, the African thought is turning into the forefront of a new movement that continues helping mankind in his route towards a more civilized and free world.