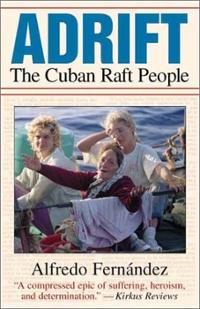 In Adrift: The Cuban Raft People, Alfredo Fernández surveys the turbulence produced an entire hemisphere away by the collapse of the USSRand concludes that, ironically, the greatest collateral damage has been inflicted not on the regime of Fidel Castro but rather upon the men, women, and children seeking to flee his dictatorship. For although U.S. immigration policy changed soon after, Castro's grip on the Cuban people has remained unyielding, even as extraordinary economic crises have wracked the island. As a result, countless refugees seeking freedom have disappeared without a trace into the churning waters of the Florida Straits. And many of those rescued in international waters by U.S. naval vessels have simply been turned back over to the Cuban authorities.
Focusing especially on the years 1994 through 1996by which time the magnitude of the post-Soviet changes in Cuba had become fully apparentFernández presents a compelling international gallery of survivors, victims, traitors, rogues, and heroes. From the infamous destruction of two unarmed private planes (sponsored by the humanitarian group Brothers to the Rescue) by Cuban MIGs in February 1996, to an afterward on the media-driven frenzy over five-year-old Elián González, found alone in an inner-tube two miles off Fort Lauderdale in November 1999this is the powerful, true saga of two nations in conflict and the hapless people adrift between their shores.
Fernández's compelling account captures the stories of the Cuban boat people, which are particularly relevant in light of the recent Elián González case. The work transcends purely ethnic interest in addressing a political topic of broad national impact