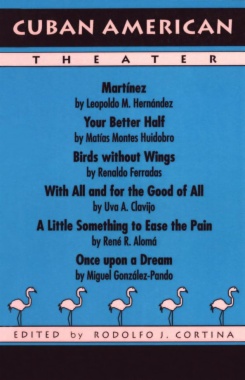 Cuban American Theater brings together six plays on the Cuban American experience. Here are presented dramatically the themes of exile, culture clash, the generation gap and discrimination, along with the full gamut of concerns about art, theatre and life itself. The plays vary in format from conventional two act realism, to absurdist theatre and, of course, to Cuban musical farce (teatro bufo), which accounts for some of the humor and characterization.

Professor Rodolfo J. Cortina has provided an introduction to situate this theatrical production within an historical and aesthetic context. In all respects— linguistic, artistic and philosophical— Cuban American Theater is the first of its kind, a truly historical and ground-breaking document.