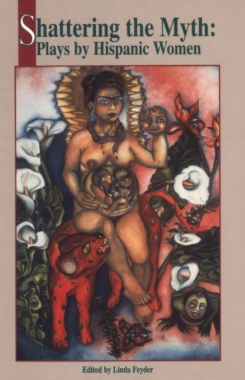 Cherríe Moraga, Migdalia Cruz, Caridad Svich, Josefina Lopez , Edit Villarreal and Diana Sáena are in the vanguard of contemporary Hispanic women playwrights in the United States. The voices of three generations of Hispanic women are heard in these plays as the women explore their bicultural heritage, articulating what it means to be an Hispanic woman and, in essence, shattering the myths that have been associated with that heritage.

The plays of Shattering the Myth illuminate a feminine language rich with texture and character, a language that has far too long been hidden from this country’s cultural tapestry.

Opening the anthology is an introduction by Linda Feyder which provides background on the playwrights and their works. The plays in the collection were chosen by noted playwright and novelist Denise Chávez.